Uncategorized Sentio Superbook … A great idea from the future! Why did it fail?

Sentio Superbook … A great idea from the future! Why did it fail? 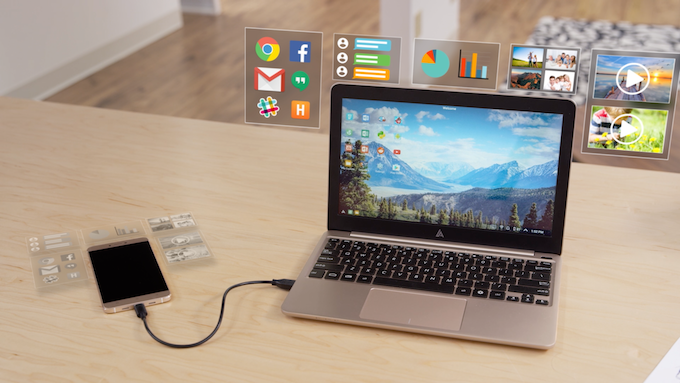 50 years ago, no one could imagine that every house will have a small powerful computer for personal use. 30 years ago, no one thought that smart phones with a big touch screen would replace the traditional cellphones. And now, we dream of making this small smart phone replace PCs and laptops altogether with the help of powerful chip-sets and maybe augmented/virtual reality as well.

Andromuim Inc tried so hard to bring the future to our hands today by enabling smart phones to replace those laptops and PCs. However, their great success didn’t last!

I was very interested in following their campaign because it is so related to our work in our start-up where we try to enable desktop experiences powered only by smart phones. To better understand it, check out their campaign video:

Their campaign succeeded very well that they raised around 3 million dollars intsead of their initial goal of just 50 thousand. No wonder why! They targeted a long waited dream and made a very well executed video explaining:

They followed the SCQA framework precisely to gather users’ attention and compassion. Leading many of users to share and back the campaign. Check out their kick starter page.

Unfortunately, the big success that they didn’t expect led to many hiccups that lasted from 2016 to 2019 where they formally announced that the Sentio super book is discontinued, delivering the product to only about 75% of the backers after a long period of postponing (1 – 1.5 year).

Some of these hiccups were because they are new to the market. If managing and scaling your solution/product isn’t done right, you might fall in many problems that can kill your product. This is a lesson learnt hard. Many startups focus on building the product and marketing it, neglecting the importance of safely scaling it as it grows bigger.

Other problems faced the new startup with manufacturers and a distributor who stole about $300 thousand dollars worth of components.

The product its self is not that bad, giving that it is only a beta version and with time and effort would have grown amazingly well polished. But postponing the delivery many times made the end users angry and achieving their satisfaction nearly impossible.

Now, after all the hard lessons they learned, many of the founders and employees of this startup didn’t give up at all. They made a new start-up “Soda Labs” that is focused on Hardware as a Service “HaaS” that builds new companies from internal ideas. Cool!

I myself admit that I didn’t pay attention in the past to these kind of problems and didn’t plan what to do if our product over succeeded too fast. Even though our product is pure software not hardware, but it needs scaling management and maintenance of its own kind. Sentio superbook was a great inspiration on many levels and I wish them the very best 🙂